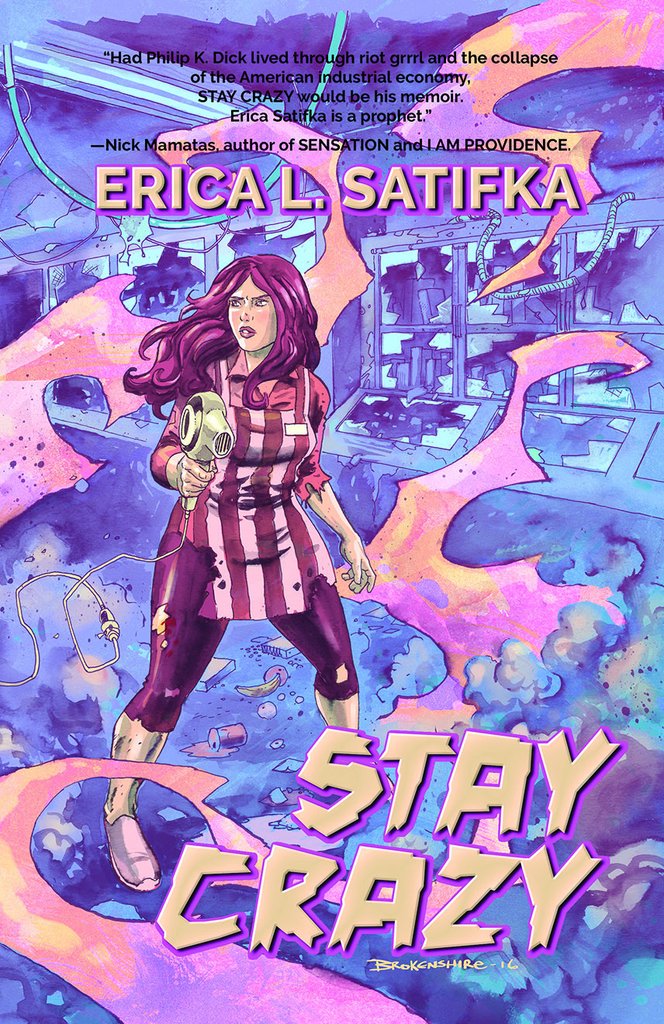 I got a chance to chat with Erica L. Satifka (my editor for the Devi Jones’ Locker series) about her debut novel, Stay Crazy, to be released August 16. I am really looking forward to reading this book!

After a breakdown in college landed Emmeline Kalberg in a mental hospital, she’s struggling to get her life on track. She’s back in her hometown and everyone knows she’s crazy, but the twelve pills she takes every day keep her anxiety and paranoia in check. So when a voice that calls itself Escodex begins talking to Em from a box of frozen chicken nuggets, she’s sure that it’s real and not another hallucination. Well… pretty sure.

An evil entity is taking over the employees of Savertown USA, sucking out their energy so it can break into Escodex’s dimension. When her coworkers start dying, Em realizes that she may be the only one who can stop things from getting worse. Now she must convince her therapist she’s not having a relapse and keep her boss from firing her. All while getting her coworker Roger to help enact the plans Escodex conveys to her through the RFID chips in the Savertown USA products. It’s enough to make anyone Stay Crazy.

Dark science fiction: Imagine all the good things that might be possible with a futuristic concept or technology, then completely invert them, add a pinch of paranoia, a slacker hero, and serve at room temperature.

I did live in the world of the book! Or at least, certain aspects of the book are heavily based on where I grew up and a job I used to have. Stay Crazy has a contemporary setting in small-town Western Pennsylvania, which is where I’m from. Her job is at a big-box store, the kind of place that’s quickly becoming the “company store” for many small communities where the manufacturing jobs that had supported families for decades no longer exist.

However, the other “world” of the novel is Em’s mind. I worked very hard to ensure that Em’s feelings were authentic for a person living with schizophrenia, reading multiple first person accounts as well as clinical research. I hope that anyone reading Stay Crazy who also shares Em’s worldview will find it realistic. It would be easy to say, “I can’t imagine dealing with Em’s illness” but that would be disrespectful to the countless people who do so every day.

But to answer the question directly: The first chance I got, I moved to the “big city” of Pittsburgh. Draw your own conclusions from that!

Why did you write this story? What is compelling about it for you?

The story was developed over several months of daydreaming while working as a stocker in the frozen food aisle of a real-world big-box store. (Spoiler: Guess what part of Savertown USA Em works in?) I’d also just discovered Philip K. Dick, so had parallel universes and reality testing on the brain. So naturally, a person who already has reason to question their understanding of the world made a perfect protagonist. The problem is that too many times, the portrayal of a person with atypical neurology comes down to a stereotype. I’ve mentioned in a different interview how people with schizophrenia tend to either be cast as “mystics” or the homeless person down the street, designed to scare readers. I didn’t want that for Em. I wanted her to be as real as I could make her, drawing on memoirs from people who have gone through similar experiences. It’s important to me to write an engaging story, but I didn’t want Stay Crazy to be the fifteenth “young woman tries to save the world” story out in the month of August.

The compelling thing about Em’s story is that she’s not your usual protagonist. Beyond her neuro-diversity, she’s also not the neglected figure who is “discovered” to save the day, or a generic figure shown to have great abilities. Em would be a background character/sidekick in most novels, allowed to do one or two cool things, make a few sarcastic quips, and stand aside for the hero/heroine to save the day. In my world, and I did this by design, Em is the primary figure. I don’t think we get enough rough-edged, imperfect, somewhat unlikeable protagonists. Especially girl protagonists like that.

I don’t believe that an author should tell a reader how to feel about a book, and I’ve already learned that most people don’t find my writing nearly as funny as I do. Can’t predict reader reaction! However, as with all of my fiction, I also want to make the reader think about the key concepts behind the story as well as just enjoying the plot. For instance, I’d like them to really think about how the idea of capitalism and being “a productive member of society” really impacts on someone like Em who can’t fulfill that role with ease. I’m sure readers will come up with their own key concepts, too, and I look forward to hearing from them about what they’ve taken away from the book. (Save an author, write a review!)

Was there anything you did deliberately while crafting this novel (pacing, language, symbolism…)? Why?

I don’t use (deliberate) symbolism, and I don’t really try to create pretty prose on purpose. But I’m pretty proud of the hallucination scenes, as they’re written in a fluid, florid style that helps to differentiate them from the more straightforward prose of the reality-based sections of the novel. That was deliberate, kinda, but not so much calculated so much as it’s what I imagine a text rendering of psychosis would actually be like.

However, the main thing I like about Stay Crazy‘s “craft” is the dialogue. I’m sort of a jerk, and so is Em, and I had a lot of fun making the characters banter and writing out Em’s little snarky thoughts about her coworkers, her sister’s religion, her therapist, and everything else under the sun. I really tried hard to capture a sort of Daria Morgendorffer/Aubrey Plaza vibe in Em’s dialogue and interactions, while also not making her so sarcastic that you want to strangle her. It was a delicate balancing act for sure. And I have to admit, it was a little cathartic to be able to write out the kind of stuff that I could never say in person. Take that, polite society!

Erica L. Satifka is a writer and/or friendly artificial construct, forged in a heady mix of iced coffee and sarcasm. She enjoys rainy days, questioning reality, ignoring her to-do list, and adding to her collection of tattoos. Her short fiction has appeared in Clarkesworld, Shimmer, Lightspeed, and Intergalactic Medicine Show, and her debut novel Stay Crazy will be released in August 2016 by Apex Publications. Originally from Pittsburgh, she now lives in Portland, Oregon with her spouse Rob and an indeterminate number of cats.

I never planned to end up here. I've never planned anything, really. All my life has been like that: I see an opportunity and I take it. Sometimes that works out better than other times. So why should … END_OF_DOCUMENT_TOKEN_TO_BE_REPLACED

I slip into the fake-leather seat, and look at my watch. I have about an hour before the shareholders' meeting, but I have to stop by the day care first, so I want to make this snappy. I've found that … END_OF_DOCUMENT_TOKEN_TO_BE_REPLACED

This is a novelette that explores a different aspect of the world of the Andersson Dexter novels. You can get the complete ebook for free when you sign up to my mailing list. It all started with the … END_OF_DOCUMENT_TOKEN_TO_BE_REPLACED