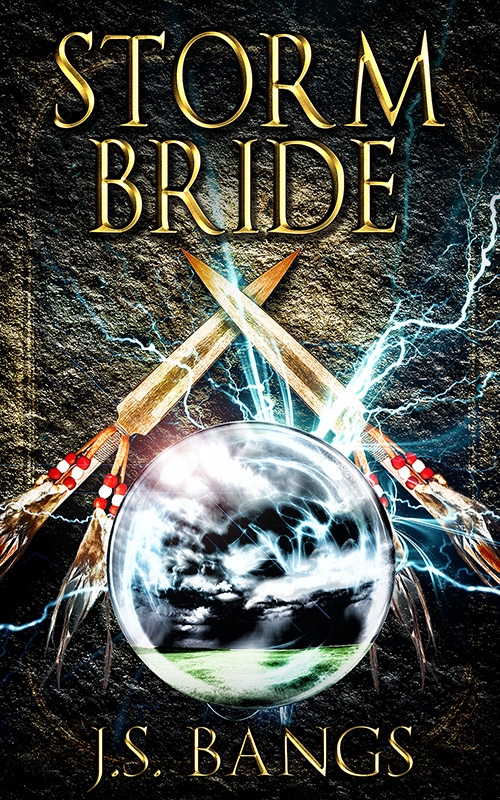 I chatted recently with J.S. Bangs, author of the fantasy novel Storm Bride.

When Saotse rode across the treacherous ocean on an orca at the bidding of Oarsa, Power of the Sea, the blind maiden believed she had been chosen for a great destiny. But she hasn’t heard Oarsa’s voice in decades. Aged now, she has found her place among a peaceful, long-lived people, though her adoptive sister, Uya, still blossoms with youth. Then, pregnant Uya is kidnapped, and the rest of her family is slaughtered when an army of mounted warriors strikes the defenseless capital, leaving Saotse grief stricken and alone.

After Saotse finds refuge with strangers in a distant village, a new Power makes contact. Saotse embraces the opportunity to bury her bloodthirsty enemies in vengeance, but wielding the Power’s bitter magic could cost her everything she is.

As war escalates and allies flock to her side, Saotse believes she finally understands Oarsa’s purpose for her. But the Powers may have set events in motion that even they cannot control, and the fates of gods and men alike hang in the balance.

J.S. writes short fiction as well, and is particularly interested in linguistics and languages, of both the human and computer varieties.

J.S.: I like to write epic fantasy in unusual settings. “Unusual” means that I eschew the traditional fake!Europe settings, elves-and-dwarves, as well as the most straightforward quest plotlines. When I do draw inspiration from real-world cultures, I tend to use non-European cultures, or else I’ll just make something up entire. That said, I still love epic fantasy, so you’ll find plenty of gods, kings, magic, and heroes. Among contemporary authors, I would compare my style to N.K. Jemison or C.J. Cherryh.

J.S.: I’d love to live there…. but not during the events of the story. The main setting for this book is the city of Prasa, which seems like a really pleasant place to live when it’s not being plundered by barbarians. They have beautiful pebble beaches, a mild climate, and excellent views over the bay and the mountains.

J.S.: My story ideas always involve the random collision between multiple ideas in my head. On a personal level, this book was written in the period around when my second child was born, and I was very caught up in the process of becoming a parent again. That came through pretty strongly in the character themes of the novel. I had also recently read a wave of Warrior Princess stories, and I was getting a little annoyed with the notion that a “strong female character” meant a girl picking up a sword and killing people. I wanted to write some strong female characters who were resolutely feminine, and who could impact the world without ever holding a weapon.

At the level of plot and setting, I was intrigued by a recurring cycle in the history of Europe and Asia where the “civilized” people living at the edges of the Eurasian continent get overrun by barbarian nomads from the inland steppes, and then the barbarians settle down and become civilized, and then the whole cycle repeats again a few hundred years later. I was also struck by something I learned about the Plains Indians, which is that some of the most iconic “plains” tribes, such as the Dakota, were actually descended from groups who originally lived much further east. But the arrival of European settlers on the Eastern seaboard created a ripple effect of westward movement.  Both of these motifs are present in the history and backstory of the setting.

J.S.: How gratifying it was. This was my second attempt at writing this story, after my first one ran aground and died on the rocks at 40,000 words. I was nervous about attempting this one again, but I was tremendously relieved to find out that the plot problems which had wrecked the first attempt were fixable, and I fixed them. (They key turned out to be eliminating a major character. Lesson: Don’t be afraid to eliminate whole characters and plot arcs if you need to.)

J.S.: I usually create a language for my books, and this book was no exception. For the less linguistically inclined, on this book I especially challenged myself to expand my use of imagery and descriptive language, and it was mostly a success. However, my line editor was a huge help in this regard, because there were a lot of places where she said, “Yes, that’s a very creative metaphor, but it makes no sense.” Good on her :).

J.S. Bangs lives in the American Midwest with his family of four. When not writing, he works as a computer programmer, and he can occasionally be found gardening, biking, making cheese, or playing Magic: the Gathering.
His short fiction has appeared in Daily Science Fiction, Beneath Ceaseless Skies, Orson Scott Card’s Intergalactic Medicine Show, Heroic Fantasy Quarterly, and other venues. You can read his blog at http://jsbangs.com, or follow him on Twitter as @jsbpax.

I was balancing a cup of tea in one hand, while hanging on to the side of the companionway hatch with the other. I climbed into the cockpit sideways, compensating for the roll of the boat. I was only … END_OF_DOCUMENT_TOKEN_TO_BE_REPLACED

"Pupusas?" The woman's nasal voice reached Randall at the back of the bus before he saw her pushing her way down the aisle. He could smell the warm, raw meat smell of his own sweaty body, and his … END_OF_DOCUMENT_TOKEN_TO_BE_REPLACED

Jo-Lynn had always laughed at Charlotte, her stupid sister-in-law, who believed the crap in those so-called newspapers she bought at the supermarket every week. It was no wonder that her no-good … END_OF_DOCUMENT_TOKEN_TO_BE_REPLACED