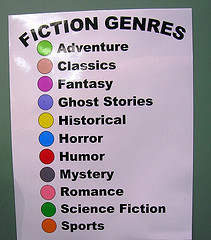 Chuck “Hilarious Potty-Mouth” Wendig has a good piece up about the shifting value of genre labels in fiction. He’s not the first person I’ve seen with this idea; Charles Stross talked about this back in May.

It seems clear to me that in other than the most basic of genre plots this is already what’s going on in genre fiction. Really great mystery stories are about a lot more than just figuring out whodunnit – they’re also romances, war stories, alternate histories, literary fiction, buddy stories… the list goes on.

The point of genre has historically been, both Wendig and Stross argue, to help readers find things they’ll like. Judging a story based on its genre is something I think most of us do, usually to our detriment as readers. There ought to be a better way — and there is: recommendations.

Some of the best books I’ve ever read were recommendations from friends. I was an SF anti-fan for years, until I was handed a copy of The Player of Games by Iain M. Banks. It’s Space Opera, but so much more. It was the more that enchanted me — and it’s that more that’s the common aspect to all the books I’ve ever loved, regardless of the label on the shelf where they’ve been placed in the bookstore.

I still get recommendations, both directly from folks I know and also indirectly from my connections on Goodreads. But there is certainly a way to harness technology and networking to make a more robust recommendation system. Wendig has an idea, referring to the story aspects discussed earlier:

Think … of a Pandora-like app that searches your e-book library and uses these very axes and aspects to help you discover new authors and stories. I want that! And I think we need it, too.

Someone need to make this. Seriously.

"Pupusas?" The woman's nasal voice reached Randall at the back of the bus before he saw her pushing her way down the aisle. He could smell the warm, raw meat smell of his own sweaty body, and his … END_OF_DOCUMENT_TOKEN_TO_BE_REPLACED

Originally published in Podioracket Presents - Glimpses “I was working at this stim joint, a place called Ultra-Sissons. It’s not where I’m working now — I wasn’t a bartender then, just a busser. … END_OF_DOCUMENT_TOKEN_TO_BE_REPLACED

This is a novelette that explores a different aspect of the world of the Andersson Dexter novels. You can get the complete ebook for free when you sign up to my mailing list. It all started with the … END_OF_DOCUMENT_TOKEN_TO_BE_REPLACED