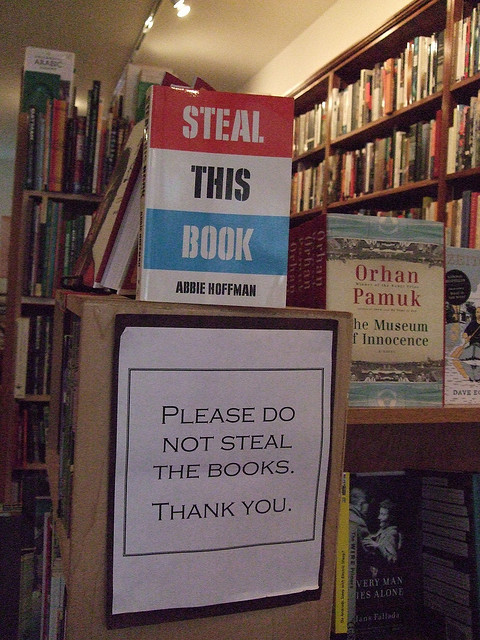 Chuck “if you aren’t reading his blog, you are totally missing out” Wendig has issued a call to arms (call to pens?) for authors to talk about why people shouldn’t illegally share digital book files. I’m probably not going to do that, exactly, but here’s my post on that subject. I’ve touched on this before, but maybe Chuck is right and it’s time to make my thoughts clear.

First, let’s stop calling it piracy. As a cruising sailor, real piracy affects my life directly. I personally know people who were held hostage by pirates; friends of friends were murdered by them (1). Equating the illicit sharing of digital media with the violent hostage and murder trade is inaccurate, unhelpful and borderline offensive.

So, what about sharing files? Does it piss me off if people are trading my books instead of buying them? Not really. Would I rather that everyone who wanted one bought a copy? Of course I would.

The truth is that I don’t really think that file sharing is a problem. Does it devalue art, by creating the conditions where people believe that entertainment should be free? I suppose it could, but I don’t think there’s any evidence of that. People still pay top dollar to go to the cinema or own copies of films, people buy music and go to shows, people buy books. People spend massive amounts of money on entertainment; I just don’t see that changing.

Sure, there are some people who won’t pay for anything they could get for free. I’m never going to sell a book to those people, so why should I fight it? Most people, though, resort to illegal file sharing because they don’t care that much about the product in the first place or it’s the easiest (sometimes only) way to get it.

I know that I’m competing with free, so I price my books reasonably and make them available in all storefronts I can find and in all formats. It’s easier to just buy one of my books than to find a free file-sharing version.

But, if you really don’t want to pay, there’s no point in me getting all worked up about it. If your friend gives you my books on a usb stick or lends you the paperback, I’m cool with that. In fact, I encourage it. More readers is great! If you get a copy of my book on some weird forum or file sharing site, well, okay. If you like it, leave a review somewhere or tell your friends or buy one of my other books.

And if you’re actually totally broke, seriously don’t buy my books – buy some beans and rice with that three bucks. If you’re broke but really want to read my books, send me an email and I’ll give you copies for free.

last night I had the most wonderful dream Carly moaned softly in her sleep, and rolled over. She dreamed and dreamed, and when she woke, she found that she still had the lingering shadow of a … END_OF_DOCUMENT_TOKEN_TO_BE_REPLACED

Originally published in Podioracket Presents - Glimpses “I was working at this stim joint, a place called Ultra-Sissons. It’s not where I’m working now — I wasn’t a bartender then, just a busser. … END_OF_DOCUMENT_TOKEN_TO_BE_REPLACED

I was balancing a cup of tea in one hand, while hanging on to the side of the companionway hatch with the other. I climbed into the cockpit sideways, compensating for the roll of the boat. I was only … END_OF_DOCUMENT_TOKEN_TO_BE_REPLACED