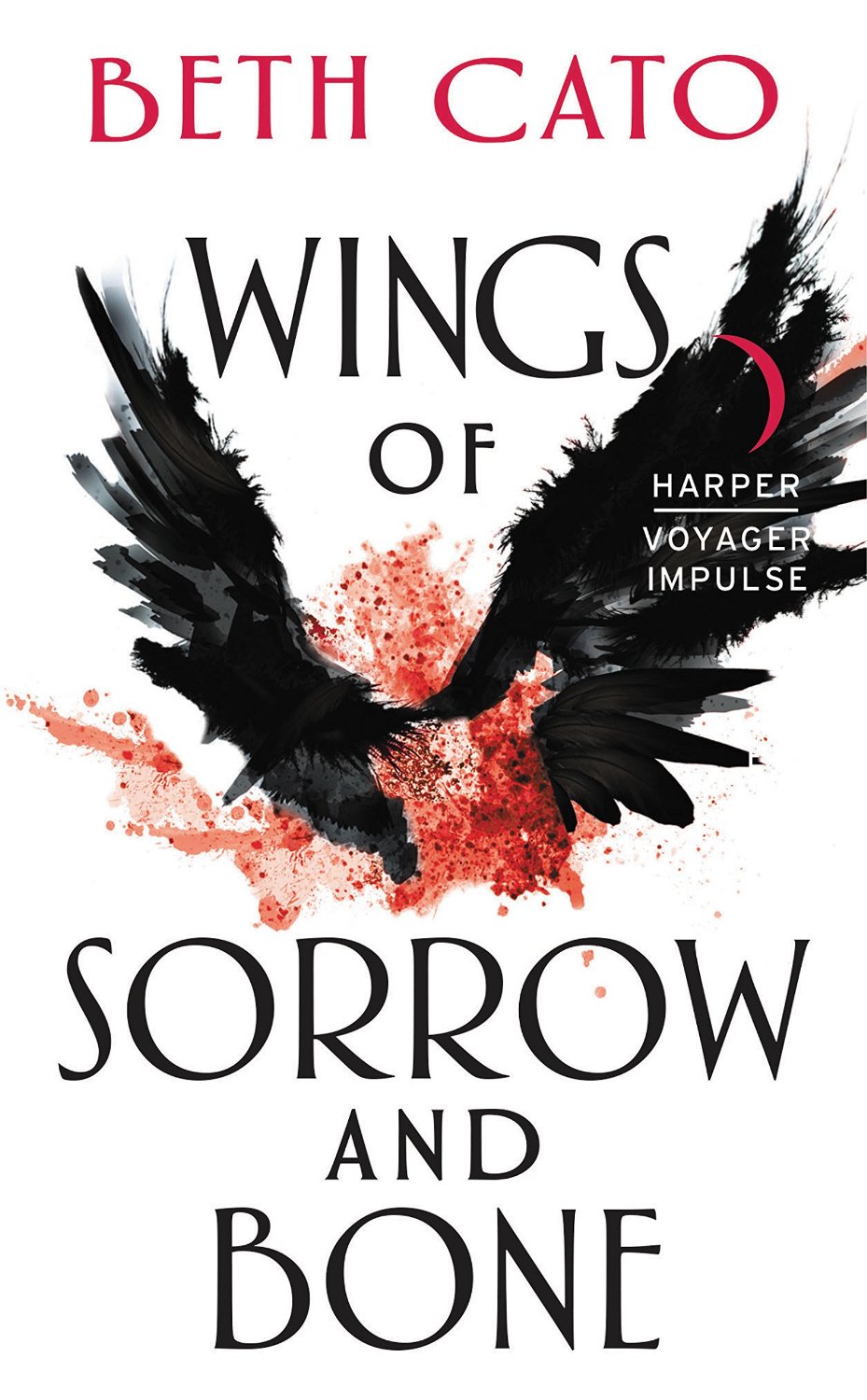 Steampunk author and baker extraordinaire Beth Cato is back! This time, she’s given me an excerpt from her new novella Wings of Sorrow and Bone. Enjoy!

Wings of Sorrow and Bone: A Clockwork Dagger Novella

A few months after the events of The Clockwork Crown…

After being rescued by Octavia Leander from the slums of Caskentia, Rivka Stout is adjusting to her new life in Tamarania. But it’s hard for a blossoming machinist like herself to fit in with proper society, and she’d much rather be tinkering with her tools than at a hoity-toity party any day.

When Rivka stumbles into a laboratory run by the powerful Balthazar Cody, she also discovers a sinister plot involving chimera gremlins and the violent Arena game Warriors. The innocent creatures will end up hurt, or worse, if Rivka doesn’t find a way to stop Mr. Cody. And to do that means she will have to rely on some unexpected new friends.

In this excerpt from Chapter 2, Rivka and Tatiana have just met and escaped from Balthazar Cody’s party. Their nosiness has guided them to a basement laboratory full of peculiar creatures…

“Yes. Gremlins. My God, they are ugly,” said Tatiana, shuddering. She had to speak loudly to be heard.

The creatures mewed, cackled, and banged on the copper and wood bars of their enclosures. Nothing was made of silver. Rivka stepped closer.

The bright electric lighting showed the green gremlins well. Some had tint variations, like patches in a quilt. Their sizes ranged from pigeon to husky tomcat. Long, bat-like wings folded along their sides. Hideous hybrid faces featured round, black eyes, some of their noses compressed and others more elongated. Their arms tended toward long and skinny, hind legs stubby.

Rivka traced her upper lip with her tongue. Doctors in Tamarania could fill the gap that partially exposed her front teeth. She was slowly saving up money for that very surgery.

“Hi there.” Rivka reached out. A gremlin’s three small fingers clutched her fingertips. There were no claws, nor did it try to lurch her off balance. The little gremlin pressed its face to the bars. Long, whiskered ears trembled. Rivka felt a vibration against her hand, and with a start realized that the creature was purring.

“A lot of them—no, all of them—are injured.” Tatiana pointed.

She was right. The gremlin whose hand Rivka held had bandages girthing most of its torso. The one to the left had no ear, just a rounded stub. The one below had no wings, and therefore, no arms. A cage over, the gremlin actually had separate arms, but its wings were gone as well.

“Is this like a medical ward for maimed gremlins?” Rivka frowned and looked around as she wiggled her hand free. It certainly seemed like a sterile surgical space. She pulled out her trusty little screwdriver again.

“What are you doing?”

“Being nosy. There has to be a ledger or something around here that chronicles their injuries.”

The cages were numbered and denoted with colorful flags; not all were occupied. Most of the cabinets and drawers held tools and blades with purposes she didn’t wish to contemplate. No paperwork had been left out. She pulled a cart from beneath a steel table. Lifting the hinged lid, she found a snarled pile of dead gremlins. She gasped.

“What?” called Tatiana from across the room.

“Bodies.” Rivka shoved the cart away. She’d seen all kinds of dead things before, people included, but there was something especially disturbing about a haphazard knot of that nature.

Like that sample? Read the whole novella for just 99-cents

Beth Cato hails from Hanford, California, but currently writes and bakes cookies in a lair west of Phoenix, Arizona. She shares the household with a hockey-loving husband, a numbers-obsessed son, and a cat the size of a canned ham.

She’s the author of The Clockwork Dagger (a 2015 Locus Award finalist for First Novel) and The Clockwork Crown from Harper Voyager.

"Pupusas?" The woman's nasal voice reached Randall at the back of the bus before he saw her pushing her way down the aisle. He could smell the warm, raw meat smell of his own sweaty body, and his … END_OF_DOCUMENT_TOKEN_TO_BE_REPLACED

Jo-Lynn had always laughed at Charlotte, her stupid sister-in-law, who believed the crap in those so-called newspapers she bought at the supermarket every week. It was no wonder that her no-good … END_OF_DOCUMENT_TOKEN_TO_BE_REPLACED

This is a novelette that explores a different aspect of the world of the Andersson Dexter novels. You can get the complete ebook for free when you sign up to my mailing list. It all started with the … END_OF_DOCUMENT_TOKEN_TO_BE_REPLACED