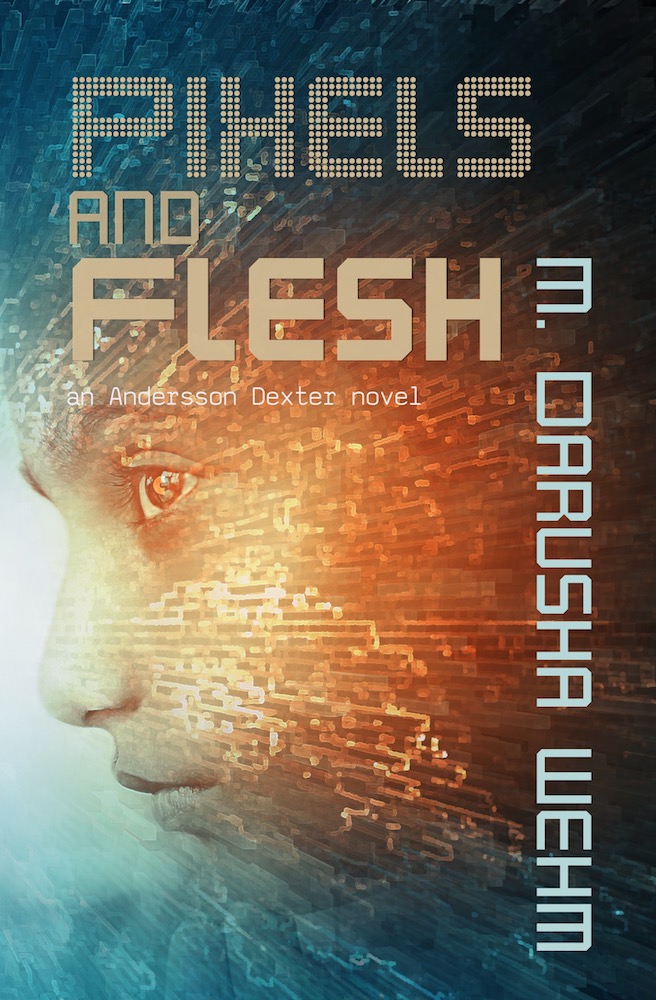 I am thrilled to share the cover and blurb for the forthcoming Andersson Dexter book, Pixels and Flesh.

After settling into a new job, new home and new living arrangements, Andersson Dexter has finally found a comfortable life in both the physical and virtual worlds. But that sense of security is blown apart when an explosion rocks Dex’s real-life Nice neighbourhood.

He and his colleagues begin an investigation into a string of seemingly senseless and random vandalism attacks, that remind them all of similar assaults in the simulated world Marionette City. While at first the attacks seem more like a nuisance than a threat, Dex discovers that there are more serious — even fatal — consequences.

As the trail leads Dex closer and closer to home, he is forced to confront the lengths he is willing to go for justice.

We are on track for a December 2017 release, but my supporters on Patreon will get it before anyone else, in ebook and audio formats!

last night I had the most wonderful dream Carly moaned softly in her sleep, and rolled over. She dreamed and dreamed, and when she woke, she found that she still had the lingering shadow of a … END_OF_DOCUMENT_TOKEN_TO_BE_REPLACED

I slip into the fake-leather seat, and look at my watch. I have about an hour before the shareholders' meeting, but I have to stop by the day care first, so I want to make this snappy. I've found that … END_OF_DOCUMENT_TOKEN_TO_BE_REPLACED

I was balancing a cup of tea in one hand, while hanging on to the side of the companionway hatch with the other. I climbed into the cockpit sideways, compensating for the roll of the boat. I was only … END_OF_DOCUMENT_TOKEN_TO_BE_REPLACED