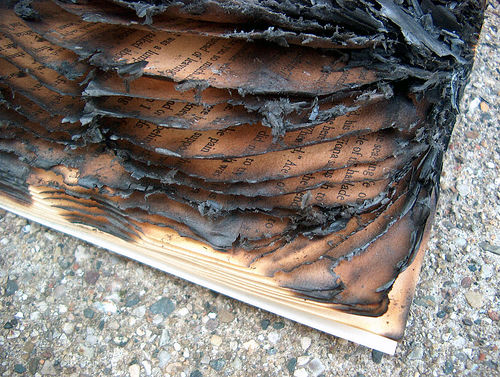 …by which I don’t mean poorly plotted or badly written books. I mean books containing subject matter which we find uncomfortable or disturbing.

Last week was “Banned Books Week,” and while I don’t really hold a lot of truck with thing-of-the-week weeks, there was a lot of talk on the internet about books that had been banned, so I’ve been thinking about it.

Like most writers, I’d argue that banning books is dumb if your goal is to get people to not read those books, especially if the people you’re targeting are kids or teens. I mean, what’s more appealing than a book the stodgy old farts think is BAD?

As Mark Twain said when the Concord Library banned The Adventures of Huckleberry Finn: “Apparently, the Concord library has condemned Huck as ‘trash and only suitable for the slums.’ This will sell us another twenty-five thousand copies for sure!” (via this Flavorwire post of quotations from writers of banned books)

But why does a book get banned in the first place? It’s because there’s something in it that makes people feel uncomfortable, that makes them squirm. Something taboo.

Over at Write Anything, there have been a few conversations about whether or not there should be any topic that’s off-limits for a writer. Part one, part two and part three. They’re worth a read, but long story short, I argue no and other commenters point out that there are different ways of handling topics. Some say that if you want to write about touchy subjects you have to approach them with the “right” sensibilities.

I agree in some ways. If you want to write well about taboo subjects, then yes it’s important to really think carefully about the issues surrounding those subjects. But I’d still argue that we have the right to write however we want about whatever we want. We just can’t expect anyone else to like it.

It’s certainly true that people could (and most certainly have) written books that are racist, rude, hateful and vile. But to my mind, that’s a different kind of bad book – one that I don’t want to read, not one that I shouldn’t be allowed to read (or, for that matter, write).

This is a novelette that explores a different aspect of the world of the Andersson Dexter novels. You can get the complete ebook for free when you sign up to my mailing list. It all started with the … END_OF_DOCUMENT_TOKEN_TO_BE_REPLACED

I slip into the fake-leather seat, and look at my watch. I have about an hour before the shareholders' meeting, but I have to stop by the day care first, so I want to make this snappy. I've found that … END_OF_DOCUMENT_TOKEN_TO_BE_REPLACED

Jo-Lynn had always laughed at Charlotte, her stupid sister-in-law, who believed the crap in those so-called newspapers she bought at the supermarket every week. It was no wonder that her no-good … END_OF_DOCUMENT_TOKEN_TO_BE_REPLACED