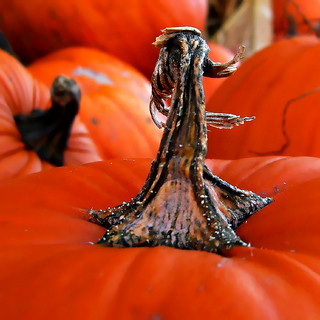 A couple of weeks ago I had a writing breakthrough and it’s all because of a magic pumpkin. This is its story.

(By “magic”, I mean merely special by dint of being used in service of solving a non-pumpkin problem. It wasn’t really magic. Magic isn’t real.)

I had been working on cobbling together the first real draft of a novel I’ve been fighting with on and off for about five years. I’ve descibed it before as wrestling with a kraken – as soon as I got a grip on one part of it, another would rear up out of the vast depths to smack me upside the head. It was, needless to say, a procrastinator’s dream.

I’d been diligently hacking away at the tentacles for a few weeks; forcing myself to face the beast each day, even if it were only for a few minutes. I was getting somewhere, but not fast. The end was not in sight.

Then one day, on a completely unrelated mission, I bought a big pumpkin. I like pumpkin a lot, particularly in baking, and here in New Zealand they don’t sell pureed pumpkin in a can like they do in North America. They sell actual pumpkins. So, hankering for pumpkin spice goodness (and having promised my friend a pumpkin birthday cake), I had to chop and cook and puree this bad boy.

Now, I like to cook and baking is okay, but I hate food prep. Chopping vegetables is boring, annoying work and trying to get into a pumpkin isn’t torture but it sure does suck. But here I was. This pumpkin wasn’t going to chop itself into pieces. Whatcha gonna do?

So there I was, staring at this pumpkin, and it’s just sitting there like a gourd. I did not want to chop up this pumpkin. In fact, I wanted specifically to not chop up this pumpkin. No problem. I’m a good procrastinator. So I just openend up that file with the kraken in it, which looked a hell of a lot better compared to this pumpkin. And a hour later that kraken was nothing more than calamari fixins.

By then I was so high on achievement that dealing with the pumpkin seemed like no big deal, either. And the cake that it turned into was awesome.

I was balancing a cup of tea in one hand, while hanging on to the side of the companionway hatch with the other. I climbed into the cockpit sideways, compensating for the roll of the boat. I was only … END_OF_DOCUMENT_TOKEN_TO_BE_REPLACED

last night I had the most wonderful dream Carly moaned softly in her sleep, and rolled over. She dreamed and dreamed, and when she woke, she found that she still had the lingering shadow of a … END_OF_DOCUMENT_TOKEN_TO_BE_REPLACED

Originally published in Podioracket Presents - Glimpses “I was working at this stim joint, a place called Ultra-Sissons. It’s not where I’m working now — I wasn’t a bartender then, just a busser. … END_OF_DOCUMENT_TOKEN_TO_BE_REPLACED