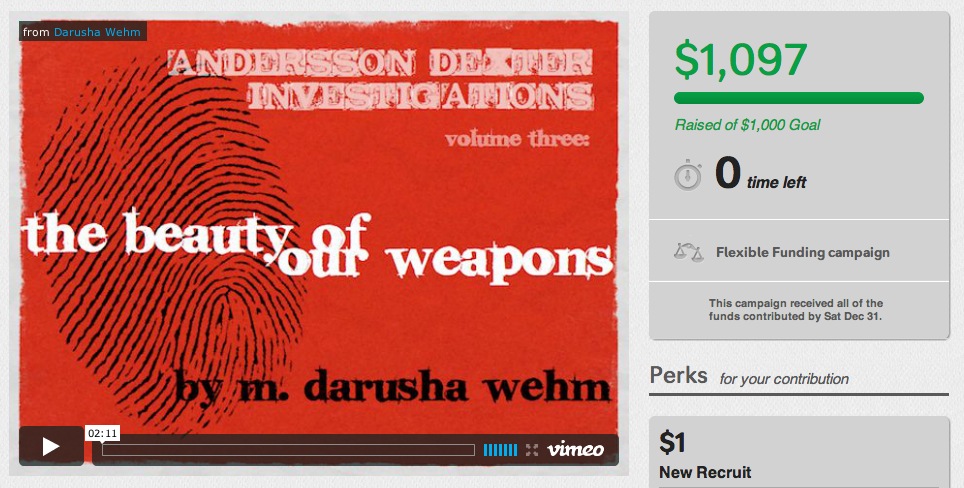 About a year ago I started planning to crowdsource funding the release of my upcoming novel. I’ll spoil the ending right now: I did it, and it was successful, raising just over $1000.

Recently, I’ve mentioned that I’m working on a couple of novels and I’ve been asked if I plan to crowdsource funding for their release, too. I hadn’t really thought about it (I’m not quite at that stage yet), but that made me think about the process for The Beauty of Our Weapons and whether or not I do want to give it another go.

As I’ve said, the previous campaign was financially successful. However, it was also stressful. Really stressful.

The campaign met its target on its last day, and it was met thanks to a very generous donor who chose one of the major packages that I’d included mostly for completeness. I was completely shocked first that the target had been met and doubly so by the generosity of this donor.

Though, nearly missing the target wasn’t the most stressful part of the process. I used an IndieGoGo campaign which allowed me to keep any funds raised regardless of whether I’d met the goal, and I’d structured the campaign in such a way that I had different things I could accomplish at different levels of success, so I was reasonably happy with the money aspect early on. What was much more stressful to me what the constant sense of nagging everyone I knew about it.

I am not a natural salesperson. Not even close. I find it kind of distasteful to ask for money under any circumstances, so promoting the campaign was really hard for me personally. I don’t know whether I did a good job or not; no one told me to stop talking about it, but people tend to be pretty polite about that sort of thing.

I did notice that almost all of the people who contributed were people who had previously supported my work. This wasn’t surprising, but it does make me wonder about the value of using this kind of method for the future, especially since I’d be tapping the same people over and over again.

So, I’m asking you: do you regularly use Kickstarter/IndieGoGo as a way to support the creative people whose work you like? Is that a method you prefer or would you rather just buy their thing once it’s commercially available? Do you like the aspect of many crowdsourcing projects where you can get limited edition or special physical products? If so, what kinds of things do you like to get?

And finally, if you are in favour of this method of funding, how would you suggest that campaigners share their news without being annoying? How do you like to be asked for money?

"Pupusas?" The woman's nasal voice reached Randall at the back of the bus before he saw her pushing her way down the aisle. He could smell the warm, raw meat smell of his own sweaty body, and his … END_OF_DOCUMENT_TOKEN_TO_BE_REPLACED

I never planned to end up here. I've never planned anything, really. All my life has been like that: I see an opportunity and I take it. Sometimes that works out better than other times. So why should … END_OF_DOCUMENT_TOKEN_TO_BE_REPLACED

This is a novelette that explores a different aspect of the world of the Andersson Dexter novels. You can get the complete ebook for free when you sign up to my mailing list. It all started with the … END_OF_DOCUMENT_TOKEN_TO_BE_REPLACED