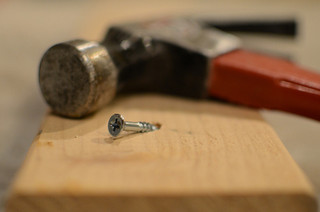 There are two things you need to know about me for this story:

1. I am a creature of habit. I love schedules and plans, and have been known to turn down the opportunity to do something awesome because I’d scheduled something lame and totally unimportant for that time. More than once.

2. I used to be a real wrong-tool-for-the-job kind of person. I’d use whatever was handy for just about anything. I once built a set of patio furniture on my balcony with only a handsaw and electric drill. Nothing really wrong with that, except that my balcony wasn’t flat, I had neither a workbench nor a vice. At one point I used a stack of old CDs shoved under one end of a piece of wood to try and recreate a more or less 90° angle to attach the table legs. It sort of worked – good enough for me.

However, living on a cruising boat for several years has broken my attachment to both of these aspects of my character. They’re still there, but I can usually recognize when they have to go. When you’re at the mercy of the weather, plans are written in the sand at low tide. And using the wrong tool can ruin a lot more than your day. When the gale starts ablowing, you reef those sails.

So, I’m getting better at realizing that just becuae I’ve always done something a particular way doesn’t mean I have to keep doing it that way. Which brings me to why I abandoned Nanowrimo this year.

I’m an 8-time successful participant in Nanowrimo, and those writing bursts have all been useful. Several have turned into parts of now-completed novels and the couple of attempts which will never see the light of day in any format were extremely useful writing exercises from which I learned a lot. And so it was that I entered the ninth consecutive November where I anticipated getting down 50000 words of a long form project.

I started on Nov 1, as usual, and by the first weekend of November I was on track wordcount-wise. No problem, right? Except there was a massive problem. I was ruining my writing.

Unlike previous years, I now have a daily writing schedule that I’ve been keeping. It’s been working out really well for me, as I share my time between writing new fiction, editing works in progress and the inevitable administrivia of a self-employed writer. It’s a good schedule (I love schedules!) and it’s been making me crazy productive. Until I screwed it all up with Nanowrimo.

It was obvious that it wasn’t working for me, and when a tool stops being useful I’ve finally learned that you put it aside and get one that is. It was hard, though. The power of the unbroken streak, the call of the familiar – they are very hard for me to ignore. But it became clear that if I carried on with the Nano schedule, I’d be doing it only to have done Nano again. And what’s the point of that? I already know I can do it. I also already know I can write novels without the Nano machine behind me. So why was I doing it again?

So, I quit. The day I decided it was over, the project I’d been working on got better. My ideas crystalized and the writing improved considerably. I’d gotten back on to the writing schedule which was working for me – I’d picked up the correct tool.

"Pupusas?" The woman's nasal voice reached Randall at the back of the bus before he saw her pushing her way down the aisle. He could smell the warm, raw meat smell of his own sweaty body, and his … END_OF_DOCUMENT_TOKEN_TO_BE_REPLACED

Jo-Lynn had always laughed at Charlotte, her stupid sister-in-law, who believed the crap in those so-called newspapers she bought at the supermarket every week. It was no wonder that her no-good … END_OF_DOCUMENT_TOKEN_TO_BE_REPLACED

I slip into the fake-leather seat, and look at my watch. I have about an hour before the shareholders' meeting, but I have to stop by the day care first, so I want to make this snappy. I've found that … END_OF_DOCUMENT_TOKEN_TO_BE_REPLACED