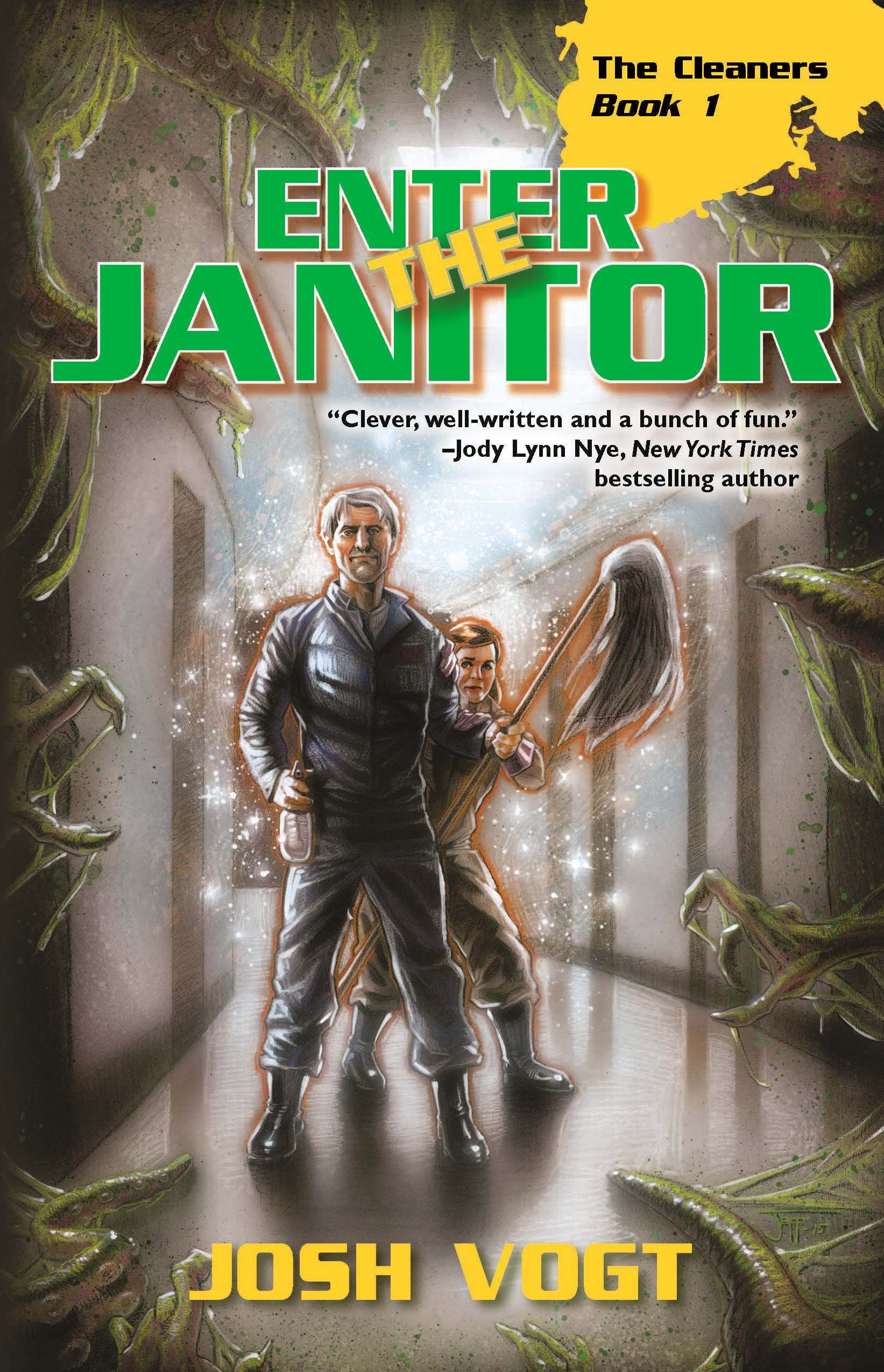 Josh is back, this time to talk about Enter the Janitor, the first book in his urban fantasy series.

A janitor working for a supernatural sanitation company must track down a fledgling demigod before it’s corrupted or destroyed, all while training a rebellious new employee whose fluctuating power could trash an entire city.

Josh: In most of my writing, no matter what genre it is or length it reaches, I tend to focus on dialogue, with a particular love for banter between characters. In Enter the Janitor, I aimed to emphasize the humor side of the story more than I had in previous stories—and found I really enjoyed working to bring the comedic elements to the surface as much as possible.

Josh: The world of The Cleaners wouldn’t look to different from our own, especially since the supernatural sanitation company the plot revolves around works to hide today’s magic and monsters from public view as much as possible. It’d be fun to work for the company, wielding mops like staves and toilet plungers like wands. While you might get overlooked by most people for doing menial labor, it’d be satisfying to know you were actually playing a vital role in keeping the world safe (and clean).

Josh: The idea grabbed me and just wouldn’t let go. I greatly enjoy urban fantasy stories, but many protagonists in them take on similar roles: cops, detectives, investigators, military, government agents, etc. I wanted to play with fantasy heroes who took on a far different mantle in order to go where they were needed and get the job done. Janitors and other sanitation workers are around us all the time, often doing their work without any sort of recognition. But what if they were fighting for our survival all along?

Josh: It surprised me how well the concept of magical janitors, plumbers, maids, and other sanitation workers actually fits with both ancient mythology as well as modern society! I mean, look at witches and their stereotypical image of flying around on brooms. Or the idea of reincarnation and our current focus on recycling. Or how the rise of sanitation and hygiene efforts has been a cornerstone of civilization itself. It makes an odd sort of sense.

Josh: Aside from getting in good chuckles and laughs, I want people to feel like they’re getting a chance to peek behind the curtain, seeing another side of reality. The next time they bump into a janitor in their office building, see one mopping up spills in a grocery store, or spot a cleaning van on the highway, maybe some part of their mind will wonder, “What if…?”

Josh: Initially, the story wasn’t as humorously bent as it is now. It was more a straight urban fantasy with the occasionally absurd situation or banter. However, I realized the funny side needed to take more prominence, and so went back in and did my best to shift scenes and characters to reflect the humorous tone more—and I feel that definitely helped strengthen the story plus set it apart as a more unique approach to the genre.

Josh Vogt has been published in dozens of genre markets with work ranging from flash fiction to short stories to doorstopper novels that cover fantasy, science fiction, horror, humor, pulp, and more. His debut fantasy novel, Forge of Ashes, adds to the RPG Pathfinder Tales tie-in line. WordFire Press is also launching his urban fantasy series, The Cleaners, with Enter the Janitor (2015) and The Maids of Wrath (2016). You can find him at JRVogt.com or on Twitter @JRVogt. He’s a member of SFWA as well as the International Association of Media Tie-In Writers.

Originally published in Podioracket Presents - Glimpses “I was working at this stim joint, a place called Ultra-Sissons. It’s not where I’m working now — I wasn’t a bartender then, just a busser. … END_OF_DOCUMENT_TOKEN_TO_BE_REPLACED

I never planned to end up here. I've never planned anything, really. All my life has been like that: I see an opportunity and I take it. Sometimes that works out better than other times. So why should … END_OF_DOCUMENT_TOKEN_TO_BE_REPLACED

I was balancing a cup of tea in one hand, while hanging on to the side of the companionway hatch with the other. I climbed into the cockpit sideways, compensating for the roll of the boat. I was only … END_OF_DOCUMENT_TOKEN_TO_BE_REPLACED