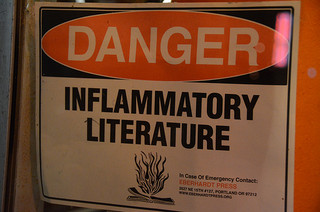 I read this article, Cowardice, Laziness and Irony: How Science Fiction Lost the Future by Jonathan McCalmont (found via Ian Sales) a few weeks back and have been mulling over what to say about it. It is long… very long and somewhat inflammatory. I am fairly certain that a lot of SFF writers would get pretty angry at what McCalmont has to say here.

That said, I think anyone writing seriously in SFF should read the whole piece and think about the issues it raises. McCalmont has strong opinions about what is wrong with SF today. I know that many people don’t think anything is wrong with SF today and my intention is not to argue that point. However, this article talks about a perceived sense of disaffection and irony in mainstream SFF nowadays.

I’m drawn to articles like this for two reasons: one) I want to write better, more serious, more complex SF and two) I personally find that, as a reader, I’m disappointed that the kinds of stories I like aren’t being published and critically lauded that often these days.

I say that item two is a matter of personal preference, but McCalmont argues that it’s a result of current SF’s “exhaustion” – essentially that writing about the world as it is through the lens of the world as it could be is just plain difficult, which is why it isn’t being done very often.

His first point is a refutation that writing about a plausible future is impossible because that future is already here.

The most common account of why science fiction no longer attempts to engage with the future is that the future is now deemed to be out of bounds. The world, we are told, changes so quickly that any attempt to predict the future would necessarily be out of date by the time the book was released.

I agree with McCalmont that this is a total cop-out. Sure, writing about any near-future that is based on the current state of the art is tempting the fate of having one’s “predictions” come true or be invalidated. But, so what? It’s fiction and its purpose is, at least ideally, to shine a mirror on the world in which we do live. Part of that world is rapid change, new technologies and obsolescence  Coming up with future-proof stories shouldn’t be the goal.

McCalmont then takes umbrage with the blurring of genre lines. Here, I am in two minds – as I’ve argued earlier, genre to me seems to be a bit of an artificial construction. That said, I did feel a stirring of agreement at this complaint:

The most obvious manifestation of science fiction’s exhaustion with the future has been an intentional blurring of the line between that which was traditionally thought of as science fiction and that which was traditionally thought of as fantasy. As Kincaid puts it, this “is a notion that has clearly taken root with today’s writers since they consistently appropriate the attire of fantasy for what is ostensibly far-future sf, even to the extent of referring unironically to wizards and spells and the like.”

(The article he’s referring to here is Paul Kincaid’s critique of Year’s Best anthologies – another worthwhile read on this subject.)

I think that the problem isn’t so much the lack of strong genre identity as it is a lack of seriousness of purpose to the storytelling. I think McCalmont is wrong when he argues that one leads to the other:

…in order to produce such a story, a writer must reach the conclusion that genre boundaries and expectations are things unworthy of being taken seriously. The problem is that, once writers began treating genre boundaries with a degree of ironic detachment, they found it rather difficult to be serious about anything at all.

I don’t see the inherent connection there. Denying the validity of strong genre lines does not require the denial of other serious content. McCalmont even goes on to talk about genre-blurring books with strong socio-political aspects.

(I suspect that McCalmont is, like me, generally turned off as a reader as soon as supernatural elements appear. However, fantastic elements can be used in a rigourous, serious story. Zoo City by Lauren Beukes is a fine example.)

Ultimately it is that lack of seriousness that is the crux of McCalmont’s (and my) complaint. There is certainly a market for escapist fiction, and there’s nothing wrong with writing it or reading it. But there is something wrong with it being the only work that is available or lauded. And escapism does have the (I hope) unintended consequence of letting us forget the real consequences of actions. Just as death is merely an inconvenience in a video game, there are no real political and economic consequences of fictional societies that hand-wave away where all that fun stuff comes from.

While the idea of an escapist fantasy that allows middle-class white people to escape their historical responsibility is about as politically dubious as contemporary science fiction gets, the fundamental mechanics of the Nostalgic approach to science fiction are largely value free as they are principally about building a fictional past that fits with how people feel about the present.

In contemporary science fiction, the traditionally disenfranchised are encouraged to write as long as their stories do not remind us of the historical inequalities that marginalised these writers in the first place.

For me as a writer, it is a constant challenge to create a universe which is plausible within the constraints of physics and the current technological state of the art, yet “other” enough to be a vehicle to comment on some aspect of the current human condition. What draws me to SF is the ability to use a what-if scenario to examine contemporary issues in an entertaining rather than didactic way.

It’s a careful balance between pure escapism and political screed, and it’s not easy to strike that balance the right way every time. I know I fail and I’ve read writers much better than me who fail, too. But we still ought to try.

The challenge facing contemporary science fiction is to widen the cracks and to peer through the fractured veneer of neoliberalism in an effort to see what could one day come to pass.  These futures, though speculative, must always remain anchored in the present moment as the real challenge facing science fiction is not merely to create a possible future, but to create the type of possible future that is currently deemed unthinkable.

We are living in a science fictional world and this means that science fiction is in a unique position to help us to make sense of a dangerously unstable world. By rediscovering its ties to reality and using old tropes to explore new problems, science fiction can provide humanity with its first draft of future history.

last night I had the most wonderful dream Carly moaned softly in her sleep, and rolled over. She dreamed and dreamed, and when she woke, she found that she still had the lingering shadow of a … END_OF_DOCUMENT_TOKEN_TO_BE_REPLACED

I was balancing a cup of tea in one hand, while hanging on to the side of the companionway hatch with the other. I climbed into the cockpit sideways, compensating for the roll of the boat. I was only … END_OF_DOCUMENT_TOKEN_TO_BE_REPLACED

Jo-Lynn had always laughed at Charlotte, her stupid sister-in-law, who believed the crap in those so-called newspapers she bought at the supermarket every week. It was no wonder that her no-good … END_OF_DOCUMENT_TOKEN_TO_BE_REPLACED